Positive Engagement with the Project

"…in terms of inclusion, I do think [the ISC project] brought people together. And it made us feel really good about what we were doing, in that everyone was really on that path. So, I think [JFAPO] were definitely successful in that."

"I think it was valuable and insightful to see what other states are doing, because I think we tend to in education just work in our little ‘silos’. So, I’m quite aware of what’s happening in South Australian schools. And it was really eye opening to go to Queensland, see what they’ve done, where they’ve come from, their journey. Also, I think it was when Bob Jackson came and did a presentation on Western Australian schools. It was just really good, because it’s increased my knowledge and understanding of what other states are doing. Where they – how they’ve made change occur. And that it is possible. And I think we’ve still got a bit of a way to go in South Australia, but it was a great opportunity being a part of this project to be able to see that. And increase my knowledge and awareness around inclusion."

Networking with Other Schools

"Networking number one. Building common – I suppose common language and understanding amongst schools across sector really, really important. I suppose helping each other to develop policy, because that’s always a tricky one. And so, having people that are really invested in inclusive education to have input into that policy – really important."

"…we’ve got the inclusive schools book club, I can’t remember the name of it, but we’re sort of going through the chapters of that all together, which is really quite a wonderful, professional conversation around that with different schools. And, you know, yeah, that’s a delight really, to be able to talk… with like-minded people, you know, all struggling with very similar things… and just learning that, you know, we’re not alone."

Enhanced Awareness and Understanding of Inclusion

"I feel like just that attitude in the staff room has changed. Yes, they’re still debriefing about kids that might need support and how we can do it, but it has been a change of you know that conversation in the staffroom."

"I feel like my knowledge has changed about what inclusivity really means and that’s really good, intentional, targeted teaching is inclusive. That’s what the project has done for me."

"I thought that I had a lot of knowledge, but I have learnt so much through the project, through people’s tool kits, through the discussions with other schools and getting to see other schools. It’s just been – like it’s a great project and every time I meet someone, I usually say you need to go on this project."

"I think we certainly were upskilled in what other schools were doing. I really liked the, the tools, the online tools that they were offering. I guess [it] broadened our focus on what was actually out there for our students. What, they could do… and their - and, you know, advocacy for our students and … just being really aware of including our students and making our environment even more inclusive than what, you know, [than] we – thought we were."

"This year has been a lot of gathering of information. We’ve done a few staff PDs about inclusion and feeding back a little bit about what we have talked about at Community of Practice, but mainly we have just been doing a lot of work between the two of us to try and develop an action plan…what is it we want to see at our school?"

"Well it’s always going to be about building teacher capacity, because we’ve got a lot more enrolments of students that have moderate – what I would call moderate needs. But our teachers see them as significant, because they don’t actually have experience outside of what they’ve always had at this school. And so, there’s a lot more training that needs to be put into teachers here at school. So, it’s probably around professional development now going forward. And – and just having I suppose lead teachers, rather than just inclusive ed. So that they can – the lead teachers… can then have a sort of a speciality where they can support, and mentoring for other teachers in that role."

Renewed and Sustained Focus on Inclusion

"One of the things… I think we’ve managed this year that the project has supported has been … making it everybody’s business to support our kids, and everyone’s business to think about the ways we include all of our students in all of our learning."

"We did a survey, at Letitia’s prompting, of our students in our learning support classes. We did a survey of our parents that were in our learning support classes and it was very affirming. That they felt really very included and were happy with their education and what was happening. And I guess the next step for us is probably that student voice or, you know, the – mainstream sort of students, seeing how they see inclusion and what that means to them." 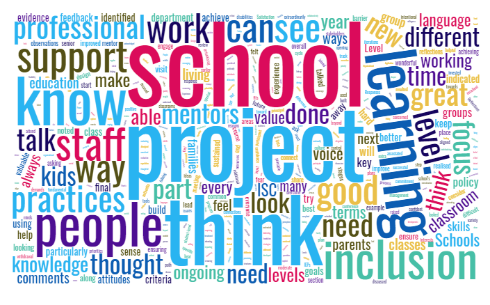